Our co-presidents of AAUW GWA, Lorraine LaShell and Jeanne Michaud, attended the 2017 AAUW National Convention in Washington, DC. The conventions take place every two years in a different location in the U.S.

We asked Lorraine and Jeanne to describe the events for all of us who could not attend.

AAUW GWA: How long was the convention? Where was it located? How many people attended?

Lorraine: The 2017 National Convention was held at the Renaissance Hotel in Washington, DC, from June 14-17. Over 900 AAUW members and friends from across the U.S. attended. Three GWA branch members attended and joined a large delegation from other New Jersey branches. 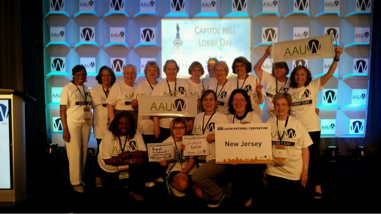 AAUW GWA: What was the age/profession distribution in attendance?

Jeanne: The age distribution skewed older, however, every age segment was represented as well as many professions. The common factor was a belief in the AAUW mission of advocating for women and girls.

AAUW GWA: What was the daily format? Were there large lectures, breakout sessions, social outings?

Lorraine: Each day was a little different but most consisted of conferences, plenary sessions and breakout sessions and workshops.  There were two dinner receptions and one luncheon as well as time to network and attend briefings.

In addition to the address by the new AAUW CEO, Kimberly Churches, speakers included:

AAUW GWA: What did the speakers talk about?

Jeanne:  Judy Woodruff spoke about life as a journalist and news anchor in Washington DC.

Justice Sotomayor captivated the audience with her talk about how she got where she is and the inner workings of the Supreme Court.  She did her entire talk from the floor of the hall while she personally shook hands with every person attending.

Linda DiVall and Celinda Lake are pollsters and campaign advisors who spoke about the 2016 election.

Laura Dunn gave a riveting account of the sexual abuse she endured at college and how it led to her career as an attorney and the formation of her non-profit, SurvJustice, a D.C.-based organization that advocates for victims of sexual assault. 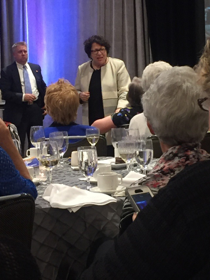 AAUW GWA: What topics were discussed in the workshops?

Lorraine: During the workshop portion of the convention there was a broad selection of topics from which to choose.  Members used, for the most part, their personal interests and those of their Branch to select which workshops they would attend.

One workshop was titled – “Learn about the latest AAUW Research: Women and Student Debt.”  We not only have a greater appreciation for the quality and depth of AAUW Research but also learned powerful information about how women find themselves deep in student debt.  As women, we assume more student debt than men and we pay it back at a slower rate because of the gender pay gap.  In particular, lower income women are at a high risk of defaulting on student loans.  We also came away from the session with ideas on how to help women continue to pursue higher education – without cumbersome debt.

Another workshop focused on community engagement and meeting like-minded neighbors.  We heard about the value of collaboration with diverse organizations in our community and how doing so can increase our AAUW impact and help us to recruit new members at the same time.  Through the session we learned how to find, connect to, and work with other local organizations to hold issue-focused events and take actions that elevate the voices of diverse communities on issues important to AAUW.

Attending the “Grow through Mission-Based Programs? Yes We Can!” workshop gave us a new perspective on how holding carefully chosen and mission-based programs/events at meetings can yield multiple desirable results. Not only can we educate and inspire community members as well as our own members, but we can also attract new like-minded members who are motivated to work with us toward effective community solutions.

AAUW GWA: Did you or other members lobby in DC outside of the convention?

Jeanne: A highlight of Convention was Lobby Day.  All attendees, dressed in AAUW tee shirts, were bused from the hotel to Capitol Hill to lobby their respective senators and representatives.  It was exciting to be in the congressional offices and get a glimpse of how Washington works. 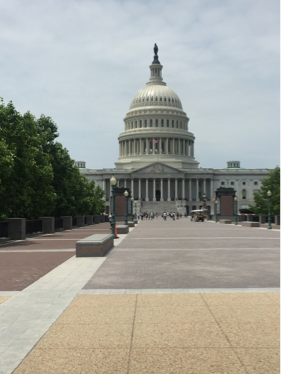 Before Lobby Day, attendees were briefed on protocol and what to ask of our congressional representatives.  Talking points included:

Staff members of the congressional offices we visited welcomed us and were well-prepared to answer questions and share information.  There was support for Title IX protections and federal financial aid programs. 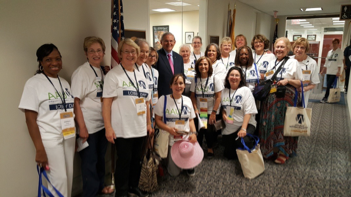 AAUW GWA: How would you get more younger people to come to the next conventions?

Jeanne: The next convention will be in 2020, the 100th anniversary of the ratification of the 19th Amendment giving women the right to vote.  This fact plus a special agenda should inspire a broad audience of women of all ages to attend.  Our branch is budgeting to send one member, someone who might not otherwise attend, to the Convention in 2020.

AAUW GWA: Do you know where the 2020 convention will be?

Jeanne: No.  They did not reveal that info.

AAUW GWA: Are there any attempts to decrease the cost of attending the convention (not just giving a scholarship)?

Lorraine: We doubt it since they explained how expensive it was for AAUW at this convention.  Our group is too big for a small hotel and not big enough to take over a large hotel so we don’t get any price breaks.  They eliminated coffee service at the meetings which saved $30,000.

AAUW GWA: Will there be more social media outreach, especially to address the 100th anniversary of the 19th amendment?

Lorraine: AAUW participates in all social media platforms.  I’m sure they will be very active regarding the anniversary.

AAUW GWA: Also it may be good to gauge the interest when choosing a delegate who has financial need in going to the convention (like have an essay contest)

Jeanne: This is a great idea!

AAUW GWA: What takeaways did you have to bring back to the mission of AAUW GWA?

Jeanne: My takeaway is a pride in AAUW and what it has accomplished for women and girls since 1881 and a determination to inspire GWA members to continue to support the AAUW mission.